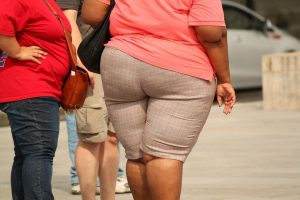 The risk of death from Covid-19 is about 10 times higher in countries where most of the population is overweight, according to a report released Wednesday by the World Obesity Federation.

The team examined mortality data from Johns Hopkins University (JHU) and the World Health Organization (WHO) and found that of 2.5 million Covid-19 deaths reported by the end of February, 2.2 million were in countries where more than half the population is overweight.

In an analysis of data and studies from more than 160 countries, the researchers found that Covid-19 mortality rates increased along with countries’ prevalence of obesity. They note that the link persisted even after adjusting for age and national wealth.

The report found that every country where less than 40% of the population was overweight had a low Covid-19 death rate of no more than 10 people per 100,000.

Vietnam had one of the world’s lowest Covid-19 death rates, with 0.04 deaths occurring per 100,000 people. The country’s overweight population comes in at 18.3%. Other countries on the low death rate list with similar patterns include Japan, Thailand and South Korea.

Age is the predominant factor affecting risk of hospitalisation and death from Covid-19, but the report finds that being overweight comes a close second.

“Old age is unavoidable, but the conditions that contribute to overweight and obesity can be highly avoidable if governments step up and we all join forces to reduce the impact of this disease,” said Johanna Ralston, CEO of the World Obesity Federation in a statement. “The failure to address the root causes of obesity over many decades is clearly responsible for hundreds of thousands of preventable deaths.”

Dr Tim Lobstein, the report’s author added, “Governments have been negligent, and ignored the economic value of a healthy population at their peril. For the last decade they have failed to tackle obesity, despite setting themselves targets at United Nations meetings.”

The researchers say that being overweight can also worsen other health issues and viral infections, like H1N1, flu and Middle East Respiratory Syndrome (MERS).

“COVID-19 is only the latest infection exacerbated by weight issues, but the warning signs were there. We have seen it in the past with MERS, H1N1 and other respiratory diseases,” said Lobstein.

The research comes following multiple reports to date which suggest that being overweight or obese can increase the risk of dying from Covid-19. Being overweight is defined by having a Body Mass Index (BMI) of 25-29.9 kg/m², while obesity is defined as a BMI over 30 kg/m².

A Public Health England report in July 2020 found that while having a higher body mass index (BMI) did not increase the chances of contracting Covid-19, it was linked to a greater risk of becoming seriously ill from the disease. One study found that for people with a BMI of 35 to 40, risk of death from COVID-19 increases by 40% and with a BMI over 40 by 90%

A study released in August 2020 from researchers at the University of North Carolina at Chapel Hill (UNC) also found that obese people with Covid-19 had an 113% increased risk of hospitalization when compared to non-obese peers.

Their chances of ending up in the intensive care unit were also 74% greater than those who were not obese and the group also had a 48% greater risk of dying from the virus.

Being overweight or obese is also a risk factor for factor for diseases such as cardiovascular disease, type 2 diabetes, certain cancers and respiratory disease. These links can leave patients vulnerable to complications from Covid-19.

The World Obesity Forum suggests prioritizing those living with obesity for Covid-19 testing and vaccination.

In the US, close to three-quarters of the population is either overweight or obese, according to the US Centers for Disease Control and Prevention.

In the UK, 67% of men and 60% of women are overweight or obese, according to a National Health Service (NHS) report.

“This report must act as a wake-up call to governments globally,” said Dr Tedros Adhanom Ghebreyesus, Director-General of the World Health Organization in a statement. “The correlation between obesity and mortality rates from COVID-19 is clear and compelling.”

What our customers say

Highly Recommended , top notch. Having experienced other gyms and regimes in the past , the knowledge and expertise from Tony in Lifegym is second to none. In commiting to join a programme here , you WILL get RESULTS. The variety of programmes and exercises keeps you easily motivated and gaining results even better than you first envisaged.
Gavin Dullaghan

Stay up to date, sign up to our newsletter

We use cookies to ensure that we give you the best experience on our website. If you continue to use this site we will assume that you are happy with it.
By clicking “Accept”, you consent to the use of ALL the cookies.

But opting out of some of these cookies may have an effect on your browsing experience.
Necessary Always Enabled

Any cookies that may not be particularly necessary for the website to function and is used specifically to collect user personal data via analytics, ads, other embedded contents are termed as non-necessary cookies. It is mandatory to procure user consent prior to running these cookies on your website.